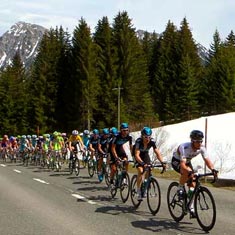 Tour de Romandie 2013 will be more important than ever before as the top riders will try and emulate Bradley Wiggins and Cadel Evans by using Switzerland’s Tour de Romandie as the launch pad for winning the 2013 Tour de France.

Wiggins: The Tour de Romandie is a Massive Race

In the winter of 2012 Team Sky realised that to be in Yellow in Paris you need experience of controlling races in the Yellow Jersey, they went on to dominate Paris-Nice, Tour de Romandie and Critérium du Dauphiné. In 2013 Bradley Wiggins looks set to relinquish his Tour de Romandie title. Wiggins may decide to ride Romandie as a domestique in support of Chris Froome, but with the Giro his major target Romandie is likely to be a lower priority for Wiggins than in 2012 when it was long marked out as a must win race.

You can be sure Chris Froome, Sky’s designated leader at the 2013 Centenary edition of the Tour de France, will have identified the 2013 Tour de Romandie as a pivotal race in his calendar.

In 2011 Cadel Evans finally realised his destiny by becoming the Tour de France champion. Back then Cadel used Romandie as a key warm up race and took the 2011 Tour de Romandie title en route to his breakthrough performance at Le Tour.

In 2013 there will be a fascinating BMC leadership battle between the promising Tejay van Garderen and the experienced Cadel Evans in the early races of 2013. You can’t help thinking that to be the designated leader at Le Tour, Cadel must win a established “form proving race” such as the Tour de Romandie. Where better to decide the leadership of the BMC team than in their home race in Switzerland?

You can watch a sprint finish, the deciding mountain stage and the final time trial on Brevet’s Tour de Romandie Cycling Holiday.

Our guests had a fantastic view of the deciding time trial of the 2012 Tour de Romandie. We rode the course then enjoyed a roadside lunch in Crans Montana on a hairpin turn! The relaxed atmosphere and excellent Swiss organizational skills means you can ride the course, check out the pro bikes in the Race Village and watch the action all in the same day.

Ride the stages and get close to the action on Brevet’s Tour de Romandie Cycling Holiday.