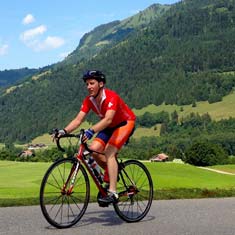 We drove over the dreaded Nufenen pass – that’s the final beast we would encounter the following day in the Grandfondo Gottardo. I think there was not a word spoken in the cars when everyone saw it! How were we ever going to get over that on a bike?!

In our latest “Rider’s Eye View” Guest Review we asked Brevet guest Gerard Melvin to share his first hand experience of taking on his first ever European Sportive the legendary Grandfondo Gottardo.

Over to you Gerard!

For a few years I wanted to do one of those ‘Etapes’ but I wanted more than this. I wanted something organised – not turn up the day before, bust my guts up some mountain and then go home! So when I did an internet search on cycling holidays with a challenge, the first thing that came up was Brevet’s website.

I immediately knew that this was what I wanted. I choose the Granfondo Gottardo cycling holiday as it looked really unique and then the excitement started!!

The next few months flew as I prepared mentally and physically. However, Brevet was with me all the way to help me get there – lots of free advice and encouragement all the way!

I planned to arrive a day earlier than scheduled just to take a bit more in and make the most of it. Everything went like clockwork and Tom was there to pick me up at the airport – I felt like a ‘pro’ from the word go.

Once I got the bike set up I headed off on my own into the stunning Swiss countryside for a few hours;

If there was a heaven of cycling this was it – beautiful roads and scenery, challenging climbs and amazing thrilling descents!

On our first full day following a fantastic breakfast in the morning, we took four or five hours to take in the Col du Pillon and Col de Mosses. We stopped quite often for pictures and refreshments – (Ed: That’s Gerard on the right below!)

The Brevet Team Car was never far away, whether it was taking amazing photos of us or handing us out refreshments and snacks. After a wonderful dinner and great nights rest the next day planned for us was a bit more challenging, my first time climbing a Hors Catégorie col!

The day kicked off with an amazingly long descent from Les Diablerets to the stunning Château d’Aigle. After crossing through the vineyards of the Rhône Valley we started the equally long ascent towards Col de la Croix.

The first part of the Col de la Croix through the steep, terraced vineyards was tough and the day was searingly hot. We stopped halfway for iced coke and ice cream which hit the spot! The rest of the ascent was quite challenging but there was plenty of inspiration from all the famous names from pro-cycling on the road including ‘Go Froome’ from the recent Tour of Romandie that featured the Col de la Croix on the Queen Stage. 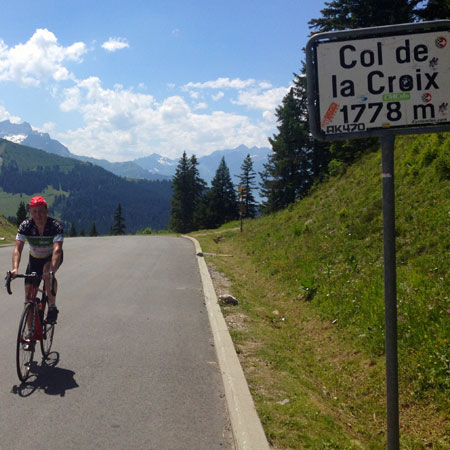 It was really satisfying to get photos with the col sign on top of the Hors Catégorie Col de la Croix and our reward was another thrilling decent into Les Diablerets where some of us brave ones recovered our legs in the icy river! That evening we feasted on some local Swiss food for dinner. I think no one had any trouble sleeping that night.

Feet Up Rest Up

On Saturday we packed up our bikes (well actually our guides did all the work!) for the road trip to the Italian part of Switzerland. It was a few hours’ drive where we stopped along the way for lunch. On the final leg of the journey we drove over the dreaded Nufenen pass – that’s the final beast we would encounter the following day in the Granfondo Gottardo. I think there was not a word spoken in the cars when everyone saw it! How were we ever going to get over that on a bike?!

We got settled into a beautiful hotel that evening and later took a quick spin on our bikes to get signed on for the big event and picked up our numbers, timing chip and welcome pack. The start line was only a few minutes cycle from the hotel which certainly took any unnecessary nerves away. When we got back, Tom and Raphaël proceeded to wash and lube our bikes!

Now we really felt like pros. I guess Brevet did not want us to worry about anything but sleep, eat and cycle.

The next day was an early start for everyone where an all you could eat breakfast was laid out for everyone at the hotel. This was the big day and my first Alpine sportive. However, after my few days of preparation with Tom and his team I couldn’t wait to get started and felt confident on the start line (Ed: Gerard on the far left).

There were three mountains to get over that day. The first was the Gotthard Pass, known as the Paris Roubaix of the Alps.

Most of the Gotthard Pass was cobbled stones but these were not too bad once I settled into a rhythm. I took a few minutes break on the cold foggy top of Gotthard Pass and felt surprisingly OK and well within the time limit.

It was a short enough decent to the next challenge – the Furka Pass.

Weatherwise it was perfect, beautiful sunny day with a cool breeze.I took it very slow on the ascent of the Furka pass, stopping every couple of kilometres to take in the stunning view and take a photo and take in the smell of the hot engines and tires from the passing sports cars and powerful motor bikes.I had not a care in the world and even forgot all about the time limit.

At about 2000 metres there were little drifts of snowy ice here and there but still a few km to the top which seemed to go on for ever. Finally when I reached the top it was very windy and I realised I had only just made the cut off by about 30 minutes. After a few mouthfuls of cake from the well-stocked feed zone and a water top-up, I hopped on my bike and headed down the Furka pass towards Nufenen. At the back of my mind Nufenen worried me – I been up it the previous day but by car!

Once I started the ascent of the Nufenen I had about 1.5 hours left until the Nufenen cut-off which I thought was plenty – I felt ok. However the gradient got the better of me and when I turned into the headwind about half way up I could feel the energy draining from me completely.

I had nobody in front of me but passed a few Italian cyclists standing on the side of the road squeezing gels into their mouths. I probably had not fuelled up enough on my decent from the Furka pass and I was starting to feel it now. At once stage I had to dismount the bike and walk about 50 meters because I had nothing left. But at the back of my mind a voice kept saying ‘never give up!’

When I thought I was nearly there I saw the sign for the 1km to go. This was the longest km of my life – turn after turn above me.

I met the broom wagon at the top and insisted I wanted to finish – I had missed the cut-off on this mountain by about 20 minutes. I should not have taken it so easy on the Furka..maybe. However, I was not going to miss out on that 35 km descent! I quickly packed in as much dried fruit into my mouth as I could and headed down for the most thrilling descent of my life – I even broke my speed limit that week!

Tom and the crew were all waiting for me at the finish line cheering as I sprinted over it. 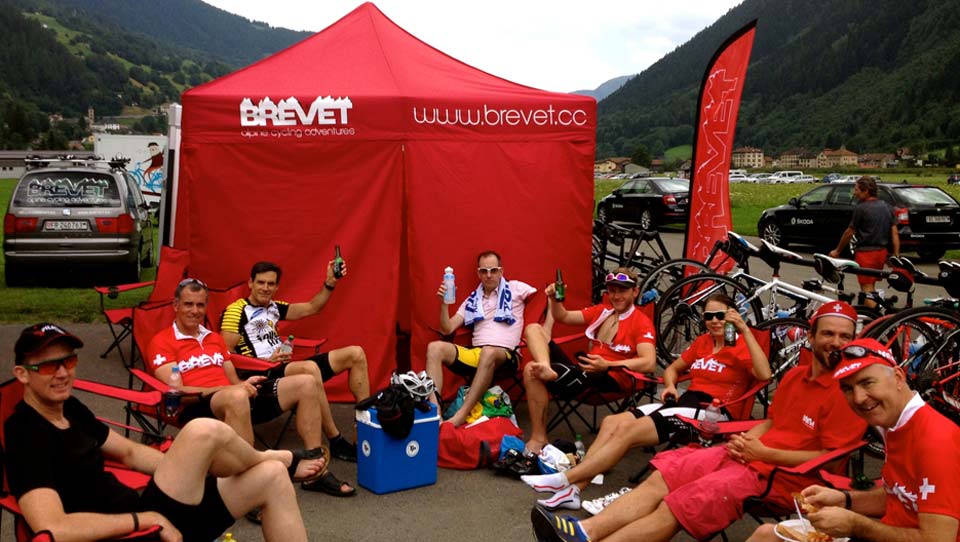 Next Up? Maratona dles Dolomites!

A massive thank you to Gerard for this fantastic write up – it was a pleasure to host you!

So what’s next on the adventure list for Gerard? Yep that’s right Gerard is joining us for the 2014 Maratona dles Dolomites!